Stories that Picture Can Tell 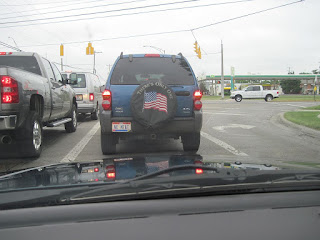 Sitting at a light the other day I looked and found myself sorta smiling and shaking my head at the same time.  Why?  Not a day goes that you don't hear on the news someone or some body of people complaining about privacy.   And yet, daily on social media and bumper stickers and license plates people freely give up information about themselves.  Have you ever wondered what your car says about you?  We hear people are living on hard times, and yet look at the 4 cars in this picture...everyone a large eat gas car/truck and everyone a new car.  You can't tell from the photo but my car is small 10 year old economy type car.

They say a picture's worth a thousand words...well, I'm not going to write 1,000 words; who'd read it if I did.  But, doesn't this picture have your mind thinking up a story?  Looking at the SUV in front of me.  You can tell they're a vegan or vegetarian...funny thing to tell stangers sitting behind your car.  There's only one with the American Flag, might mean they're patriotic and think only that flag should be displayed, not for instants The Confederate Flag?  Or perhaps they mean though they are 2 parties constantly waring with each other, there is only 1 country.  They're probably a boater and or a camper...large hitch under the bumper.

Anyone else ponder things about places or people when you're stopped in traffic?

Since it's Friday 5, I'm counting that as 2 above...1, the general picture and wondering about the economy...maybe if people drove smaller more gas friendly cars they'd have more money?  Or maybe people are doing better then the media has us believe?

4..I was hoping to be done with the feather and fan knitted afghan (Sand and Sea), by now; but am not...though I'm continuing to work on it. 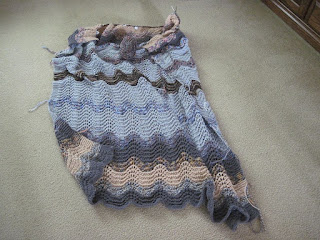 Working on the 2nd to last section, so maybe ...hopefully soon it will be finished.

5..I've had the best time this week connecting with friends from my childhood, thanks to Facebook.  There's a group page from my old hometown, and all of sudden I've connected with about half a dozen friends from my early grade school days.  We've been sharing stories, pictures and memories.  What great fun.

Speaking about memories.  Please pop in on Monday.  I'm going to try to get going with a meme, titled Memory Mondays.  Tried sometime back but got way laid.  Hopefully will have a linky up, provided I can figure it out.  Everyone moans about Monday, lets put some fun into it.