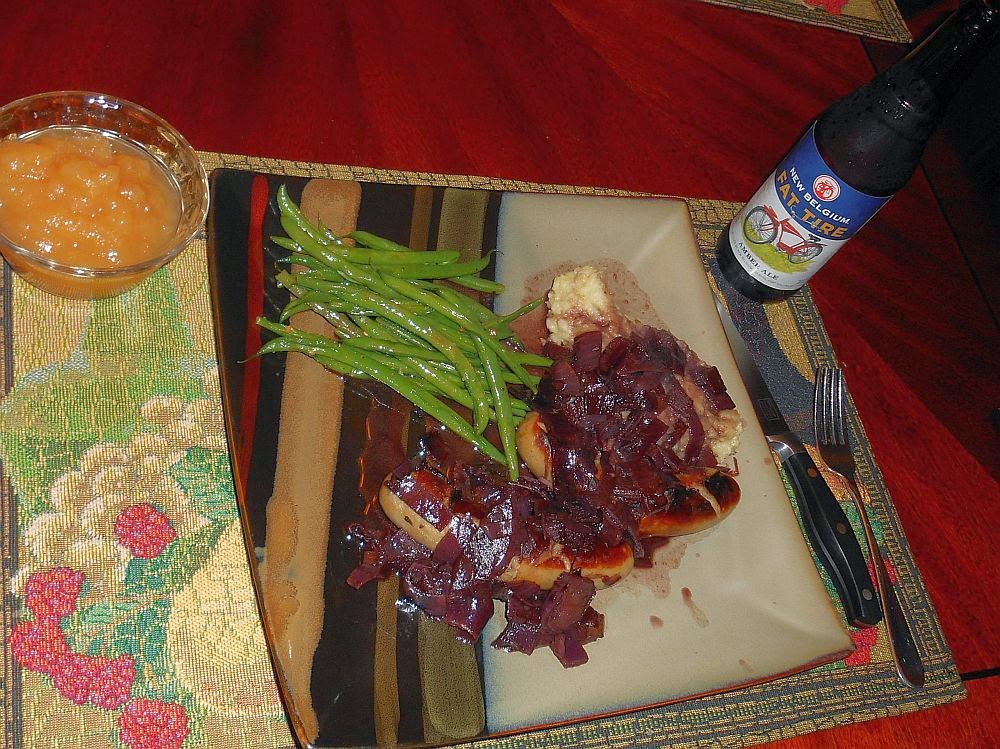 Sorry for the strange angle here in this picture, was in a hurry to eat!  Actually this is hubby's picture, as I don't drink beer anymore...allergic to it I guess.  It makes me sneeze.  My plate had a glass of wine beside it.  Apple sauce, fresh green beans, and bangers and mash.  I didn't really know what Bangers and Mash were, or how to fix them.  He purchased the Bangers at Cosco.  I asked a few Irish and English friends on facebook how to cook them, and did some google searches before finding the recipe on their website.  I didn't use their recipe, but will probably try it next time with the current jelly...sounds good.

The recipe I used:
Browned the Bangers in a skillet in olive oil somewhere around 5 minutes a side (hard to get all sides brown, mostly it's just 2 sides because the curl of a sausage).  Placed them in the oven on warm.
Made Mash Potatoes (something I NEVER make) it said to add dry mustard which I didn't have so added some ground ginger instead for a little kick.  I'm not one to measure when cooking, just added what seemed right in terms of milk, and butter.  The recipe said 1/4 cup of butter and milk and 2 TBLS of the mustard, 1 tsp of salt and pepper.
Brown 2 large red onions in 1 TBLS butter, I used 1 huge red onion, and sprinkled in olive oil instead of butter.  Says to cook them about 8 minutes...I didn't time them, just cooked them until they looked right to me then added a can of beef broth (recipe called for 6 cups, I didn't have that much...but I was also cooking for 2 instead of 4 so it was fine.  2 cups of red wine.......I added more to offset the shortage of beef broth a bit, and I tossed in a little chicken stock I had in the fridge (maybe 1/4 cup).  Let it cook to half the volume it said.  I cooked it down a bit more, as I wanted it a little thicker.

When my potatoes where done, I added them to the oven as well, though that's not what the recipe said to do.  They assume you fix the potatoes and sit down to eat.  I had everthing at ready, had turned off the onion gravy and then when hubby came home, turned the gravy back on very low while we had cocktails.........then served it.

It was hit.  The sausage..Bangers is a much lighter texture then say Polish Sausage or Bratwurst.  When he brought the Bangers home, I thought they were an Irish meal, but turns out it's more of an English meal.

Thanks Kim, Heather, and Christine for the imput.
Posted by Sandy at 9:50 AM 5 comments: