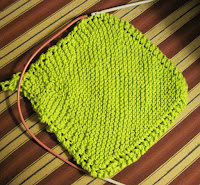 I don't like working with cotton. I find it hard on my hands, it doesn't seem to shape as well. I've used it to make a baby hat or too, several pair of booties some time back; and now a washcloth. I bought several skeins of colors I liked a year ago; but I have a feeling it's gonna stay in my stash for quite a while. I love using a cotton knitted/crocheted cloth; but I don't like the actual making of them.

Anyone else had that experience? Now that's it's cold, it's not really the right time to make items with it anyway; but...interested in your experiences.

Daughter likes green, so perhaps I'll find some nice green soap and add this to her Christmas gifts? Also don't like the way the cloth ended up. Just your basic corner to corner; but the decreases look sloppy to me.
Posted by Sandy at 10:53 PM 12 comments:

It Pays to clean? 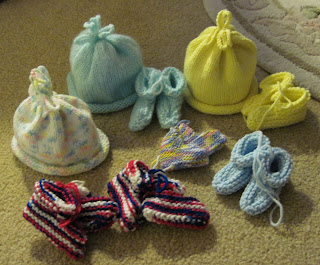 Anyone addicted to yarn, like myself will relate to this I know. Moving a few things around the other day, and found a bag of something soft. Hum, wondered what it was. When I opened it, I found booties! Had completely forgotten I made these. Not even sure when I made them (maybe on the plane when hubby and I went to Florida?), but was thrilled to find them. They're mostly FO (finished objects for my non yarn friends). I'll be able to add these to the current hats and booties I'm making. Got 2 sets finished, and 2 partial set's going...so hopefully can get these all finished and in the mail soon.
*Found objects are the 2 pair of patriotic booties, the multi-colored wee little preemie booties, current items are the yellow hat and booties-multi-colored hat, aqua hat & booties, and the light blue booties. Plan to make booties to match multi-hat, and hat to match light blue booties.

Soooooooo....go clean out something and see if you find a treasure too. Let me know if you do.

Hope you all had a fabulous Thanksgiving with family, and hope you'll check out my posts about being Thankful, here and here.
Posted by Sandy at 4:13 PM 11 comments: 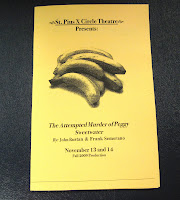 Traveled to St. Louis this past weekend to visit with my daughter and see her play. Well, not her play, but it was her directorial debut. The play is quite funny, she had the lead in this play when she was a sophomore in high-school. Doing British accents is a challenge but always fun. Lot's of funny lines in the play, "The attempted murder of Miss Peggy Sweetwater". Her kids did a good job under her direction, so it was one of those proud mommy moments. The story takes place on a banana plantation, thus the monkey's and bananas. You know anything with a monkey in it has to be funny. The cake she bought the kids was for their cast party, they loved it and were quite surprised she did that for them. The set simple, a living room; but the kids did build it which was pretty cool. They said they learned alot from her. Nice hun!

Where you involved with high school drama? Or college theatre? Brought back fun memories for me watching this past wkend; of all the times I watched my daughter on stage either in a play, or singing in a concert.
Posted by Sandy at 12:00 PM 7 comments: 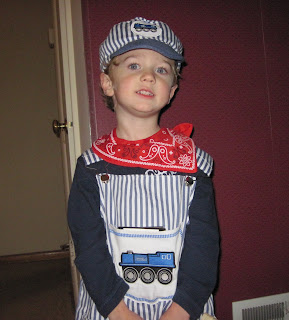 Here's my pseudo-grandchild at Halloween. He'd only just gotten over the flu, so wasn't as animated as he typically is.........still though, soooooooooo cute.
Posted by Sandy at 12:17 AM 5 comments: 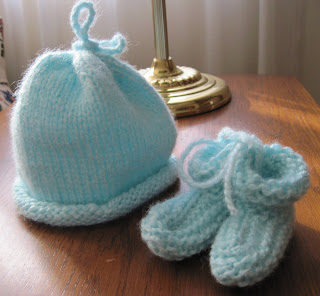 I'm not sure what color you call this, but it's one of my favorite colors when making baby items. This is the same yarn I used awhile back for a scarf and hat for The Bridge Project. In fact, it's the same skein of JoAnne's Sensation. I love buying that yarn in it's large quantity. This hat and pair of booties went to my SIL for a baby shower gift. I've made a 2nd pair of booties, and have started a 2nd hat. This 2nd set will go one of the charities...perhaps Lil Troopers?

One skein has 615 yards of yarn, so you really can make quite a bit with one skein of it. This is chunky, so thicker than normal weight yarn, and soooooooooo soft. The set is knitted. The hat was knitted in the round, while the booties are straight garter stitch (I think they're more cushy when made with straight garter stitch), on size 9 needles.
Posted by Sandy at 9:09 AM 7 comments: 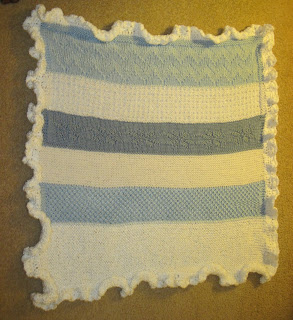 I've been trying hard to change WIP (work in progress) to FO (finished Objects) as I have too many projects going. Would love to get everything currently started finished by the end of the year to start fresh in 2011. Don't know if that's going to happen, but I'm trying.

This preemie knitted ghan is for donation to The Linus Project, through Oddball knitters. It's a fun group, everyone knits a section and passing the blankie along to the next person. Each blankie has a theme, a name and the knitters select their colors based on that. I've had this one far too long. Had it tucked away when Mom died; and finally remembered it, found it and got it finished and mailed. Felt good to get this long over due project finished. Working on a 2nd one currently for this group that's almost as old.

An especially busy week this week at work, longer than normal days.........sigh, that really cuts into my knitting, crocheting, and blogging time.
Posted by Sandy at 7:57 AM 5 comments: 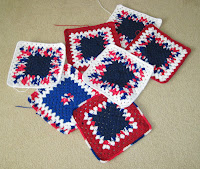 So many way to show we care. Red, White and Blue. Be patriotic. These 12 inch squares are traditional style grannies. The royal blue left over from a blue scarf I made for The Bridge Project, The white from a yarn donation from Rae's Mother, the red and variegated from my stash, navy also left over from several other scarves for The Bridge Project. These 7 12 inch squares are for a new group I found recently doing a search using the words crochet and charity. American Angels Heroghans.

Show your patriotism. If you like to make baby items there are 2 groups who distribute handmade gifts to newborn's who are born while Daddy's deployed. (Marine Corp Kids and
Lil Troppers). Want to support injured military personnel, donate 8 x 10 inch squares through HAP (Handmade Afghans to thank our military Project), who assemble and distribute thousands of afghans throughout military hospitals to our injured service men and women. Want to support the active military personnel make hats for the Ships Project (read about it on my friend Sandie's blog). Give your support to grieving family who's hero has paid the highest price, their life-- donate 12 inch squares for American Angels Heroghans. All groups have links in my sidebar.
Posted by Sandy at 11:35 AM 15 comments:

A week or so ago, hubby and I were blowing and raking leaves. He always starts up on the roof in order to get the junk out of the gutters etc. He was almost done when our trusty blower stopped. He came down off the roof and headed to the hardware store. I thought he was looking for a part, so I continued raking. When he came back from Home Depot (his favorite store), he had this new shinny red blower! Ok, the old one was old; maybe it cost too much to repair. I don't know, he didn't say. We continued with our work. Later he said, he thought he could fix the old one and would use it as a vacuum instead of blower---therefore we'd have one of each. They all do this, I think. But, the connection to do that on the old one broken and so was taped with duct tape, so he never used it except to blow. 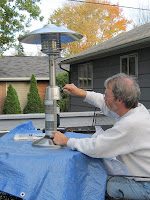 That's him, putting together the other item he bought while there at Home Depot (did I mention it's his favorite store?) It's one of those table top heaters. You sometimes see them in outdoor eating areas as a way to extend the time people can eat outdoors at bars and restaurants. Sometimes there on a taller pole beside the tables. Interesting I thought; but you see my printer hasn't been working right for several months. Every-time I need to print something, I email it to him at work. That's convenient, right? It printed spotty. Well, that was before the new computer which is Vista. After that, it didn't work at all. The photo software isn't compatible with Vista, and the scanner part only partially worked. I wanted a new one; he said to wait. I'm still waiting. You know how much new printers cost? Not much is the answer. Anyone care to guess what a new shinny blower and table top heater cost? When women go shopping they compare prices, they shop around, they think about it. Often they go multiple times before they buy something..........men go, see, and buy. End of story. 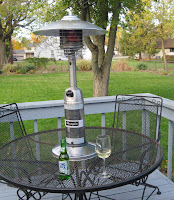 After we finished the leaves, the sun was getting lower in the sky, it was cooling off. But, cocktails on the deck is always a nice reward after a hard day of labor. lol

He got a good buy on the heater, it was on sale; and he had a coupon for more off. Several days later he was once again at Home Depot...did I mention it's his favorite store! I don't even remember why he was there that time. lol Anyway, they had lowered the price again and so he get's a refund of the difference.
Posted by Sandy at 9:48 AM 8 comments: 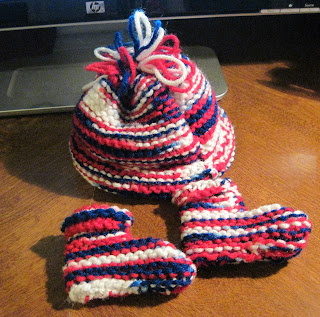 Patriotic booties and hat for newborn. This last set fills my box, and completes this donation to Marine Corp. Kids (link on sidebar). I sent 5 newborn sets, plus one extra pair of booties, and 3 preemie sets with 2 additional hats. They are all knitted, and vary in colors. Blue variegated, light pink, yellow, brown variegated, rose etc. Think most have been pictured here earlier as they were finished. Marine Corp Kids sends donations to various military hospital when wee ones are born while Daddy's deployed. Such a small thank you for all they do.

I must now focus on finishing up some long over do ghans that are in my project bags. I don't like having them hang over my head for as long as they have.
Posted by Sandy at 11:50 AM 8 comments: