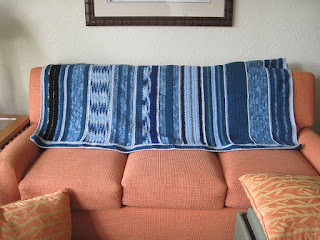 Arapaho Afghan here right after finishing it.  It's being displayed on the sofa in the condo while we were vacationing in Hilton Head.  It traveled from Ohio, West Virginia, Virginia, North Carolina into South Carolina and was worked on all along the way.  This picture is before it was laundered and blocked.  Made from donated stripes through Bridge and Beyond.  Once it's laundered (being done as we speak), it will require blocking and then will be donated to Homeless Families Foundation through my charity, Bridge and Beyond. 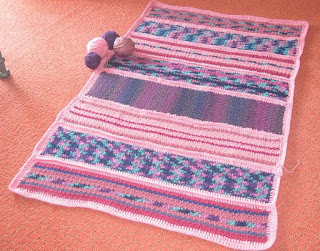 This afghan also made from donated strips also made the same journey; though it wasn't assembled in the car throughout the states as Arapaho was.  I started working on this one after we arrived and completed the previous one.  It's in the works here before adding necessary width and prior to being named. 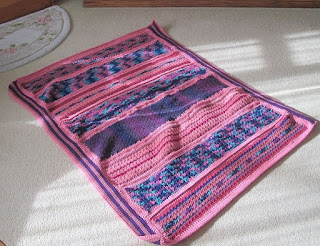 Here it is again, back home in Ohio after the additional inches were added to the width by way of border using the 3 colors shown above.  This has now been named Desert Rose after some voting over on Bridge and Beyond.  This also is in the works of being laundered and blocked.  Believe this one will require pinning even when it's being blocked.  They don't always, but with the wider border on it's edge you note some curling.  I do think the size is better after adding the border and belief it will lay appropriately after some major blocking. 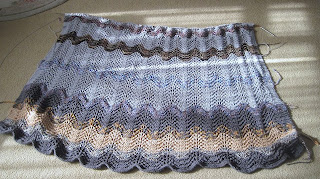 And still in the works, though farther along is Sea and Sand.  You've not seen this one since November.  It now has 2 additional sections done.  Am currently working on the last of the light gray sections.  The light gray sections are the largest sections so I feel like I'm making some reasonable headway.

The first 2 afghans are crocheted from donated stripes, the 3rd afghan is one I cast on quite some back.  Knitting a large feather and fan style afghan does take time.

I've not done anything with the traveling scarf, even though it too made the journey (just as 3 afghans did); nor did I work on my belated Christmas Gift for DD which was noted here on the Love Your Library Post.  It is on my YOP list in the form of something for DD.  Though it turned into a sweater from a scarf.........much bigger project.

YOP meme, badge, and list found in tab above.

Brief summary:
8 of the 10 afghans completed from donated squares/strip
no progress on cotton washcloth or cable skirt for self
no progress on blocking cable scarf and blue scarf
Christmas project for DD changed from scarf (almost done) to Green Sweater, not yet cast on.  Probably going to frog scarf.
Posted by Sandy at 1:00 PM 13 comments:

Library and Green Calling out to my Darling Daughter 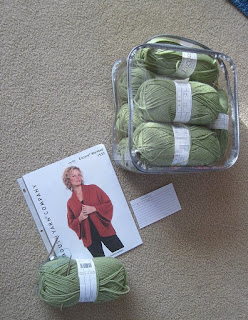 This pattern is one I've had in my library for quite a long while.  Kept thinking I'd make one for myself and my DD....fast forward.  Decided when I saw this perfect green that it would be great for my Darling Daughter.  Green is her signature color.  Spotted the yarn a short time before Christmas and decided to wrap it as is...make sure she liked it and then make her the sweater wrap.  Bought the 2nd pair of needles I needed...as the pattern calls for 2 sizes and I only had one on hand.  Now, I need to get going on it.

My DD is an avid reader, has been since she first learn to read the cereal box ....back in the day, and so when I spotted this meme, Love you Library, knew I had to participate.  Late though as I didn't find the meme until after the first of the month, and once I found it....took me awhile to get my post up.
Posted by Sandy at 9:27 AM 1 comment:

You're not seeing doubles, this is one afghan, though in this configuration it looks like 2.  Almost all the stripes/strips have edged and attached.  Now need to bring the two together.  Just worked with 2 pieces as it's going traveling with me and I thought it might be easier to finish the last couple of stripes were are held together here with double pointed knitting needles and darning needles.

Wanted to get this post written yesterday, for Sunday's Year of Projects, but didn't make it.  Late this week, counters being early last week?  Maybe, maybe not.  This afghan is made from donated strips through Bridge and Beyond and will be donated to Homeless Families Foundation when completed.  Hopefully, I can unveil the finished ghan for you on Friday for Finished Object Friday.  This one is called Arapaho.

Not much to report, but hope to work more on the knitted feather and fan, Sea and Sand after this one is completed, and plan to unknit the traveling jewel scarf...it's just coming through for me.

YOP link in meme tab above.  Please join us, it's fun.

Pop back in tomorrow for a new meme called Library....sounds interesting to me, if I can get myself rolling on another meme.
Posted by Sandy at 1:32 PM 11 comments: 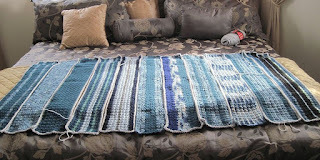 These are strips that were donated through Bridge and Beyond.  Almost got all the edging done and will start assembling soon. I'm edging them with light gray.  Once it's assembled I'll see if I need to add to the two sides for additional width prior to doing the final border. 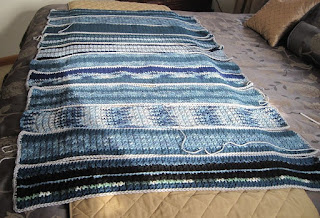 Strips vary just a bit in length, and might need a little coaxing here and there; but I think it will come together just fine.  These strips weren't made to come together as 1 afghan; but to me it looks like they were.  I like how it looks and believe the name my Darling Daughter came up with as we designed together over Christmas vacation is perfect.

Like 99% of the afghans you see here, this will be donated for Project Welcome Home, when a family transitions from shelter living to permanent housing.


Work In Progress Badges and Links in Meme Tab on the top of the blog.  Please join us, it's great fun seeing how creative people are with their projects.  This isn't limited to knitting and or crocheting, by the way. (wipw meme experiment, 12+8)
Posted by Sandy at 7:05 PM 9 comments: