Photography Challenge Day! (day 2 of our week long challenge)
Today challenges you to be creative with your photography, and get yourself in with the chance to win the photography prize. Taking interesting photographs in this instance isn't about flashy cameras or a great deal of technical know-how, it's about setting up a story or scene in a photograph and capturing something imaginative. Your photograph(s) should feature something related to your craft, so that might be either a knitted or crocheted item, yarn, or one of your craft tools. One example of setting a scene would be to photograph a girl in a knitted red cape walking through the woodlands with a basket of goodies, as in the Red Riding Hood tale, or you might photograph a knitted gnome hiding among the flowers in your garden. Photo editing is permitted for competition photos. Here are a few examples of my own photographs to illustrate an imaginative use of photography, but you can do much better than these...

The mystery surrounding who made the first Martini continues; but there are several accepted stories. A Martini is a cocktail, originally made with Gin and Vermouth according to Wikipedia. Through out history how it's made has changed based on financial considerations as well as geographic locations within the United States. Though, when and where may be up for grabs (the two coast fighting over whom gets the honors), there is no question that a Martini is in fact a U.S. invention.

Bitters were probably used before the more popular Vermouth took it's place. Small amounts of Dry Vermouth rolled around in the glass towards the countries of France and Italy and then dumped became popular. Both of those countries had large numbers of Vermouth Distilleries thus the direction of the rolling.

James Bond popularized The Vodka Martini when the quote, "shaken not stirred" in Goldfinger caught on. Vodka changed over the years to include flavors which the T.V. series, "Sex and the City" took advantage of. Personally, the sweet sissy Martini's aren't my style; but they are quite popular.

A Dirty Martini uses Vermouth and Vodka "shaken...not stirred" and served in a chilled Martini glass with gourmet olives, such as these filled with Blue Cheese (my personal favorite). 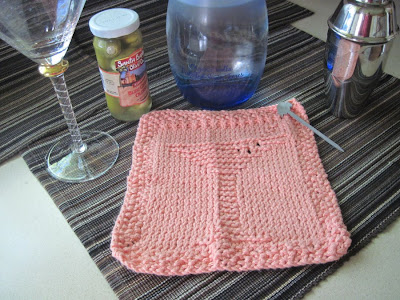 The Martini Cotton Washcloth even has olives (see the holes). This fun pattern is courtesy of my new found friend, The Martini Knitter. I plan to knit more of these and was pleased with the outcome. I tend to like larger washcloths, but apparently my knitting gauge is lose enough that her 5 inch cloth became almost an 8 inch cloth for me using size 6 knitting needles. I used Lily's Sugar'n Cream Tea Rose. Wondering if the pattern might show up a bit more in darker solid. Somewhere along the line I got off 1 stitch, but the only place I see it is the skewer that holds the olives. Didn't feel the need to rip it out to fix it. I like how there's a good space between the top of the glass and the cloths edge on top, and might add several rows to get the same effect on the bottom the next time I knit one; as I think the bottom of the glass gets a bit lost with the border. The border is made with seed stitch, not a stitch I enjoy doing, so might try substituting good ole garter stitch next time round. Thank you Sarah for your inspiration and for sharing your pattern. I used a 2.5 oz 120 yard skein and had 1.3 ounces left, so if you knit a bit tighter then I do; you could probably make 2 cloths from one skein.

Remember, it's "Five O'Clock SomeWhere", get your Martini on. You might enjoy this Martini Post to help get you in the mood.

With the seasons changing, it's time to think about getting out and about, and keeping the kiddo's who will soon be out of school engaged. Please check out my new blog (just started yesterday), Flat Stanley and Friends.
Posted by Sandy at 10:20 AM