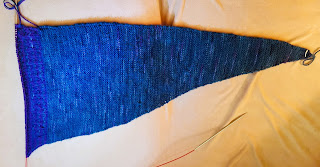 Moving on into section 2 with the colorworks area. of Snail Hallow Shawl.  No clue why that's the name of the pattern.  You continue to work increases, every few rows.  The blues and purples are so close I'm finding the color work hard on the eyes, and a bit difficult.  I've done color work before, but with heavier yarn and brighter colors.  So, I'm using one of those lights you were around your neck; (Thank you Sandie P) which seems to be helping.  Still though, can't work on this for very long at a time. 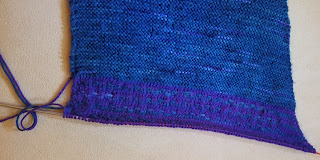 A close up of the color works area..  The shawl my daughter is working on from our gifted kits from Craftys has more contrast in her colors; though we both think it's odd that the kit chose variegated yarn which makes it look like your color blocks are a bit off, rather rather than 2 distinctive colors. 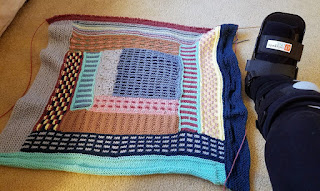 A bit of an example.  This is the start of an afghan I made 4-5 ish years ago using lots of color work.  Some sections are 2 colors, some are 3.  Some areas are lots of texture.   Was using up left overs here, thus the huge variety of color; but...see what I mean about how much more the color work shows up with solid colors that aren't close in color?  Yes, that's my broken foot in the picture.  Couldn't get it out of the way I guess when I snapped the photo.  Was non wearing bearing for awhile and used a walker, then was able to walk around in my boot.  No clue where this was in the long multiple month process. 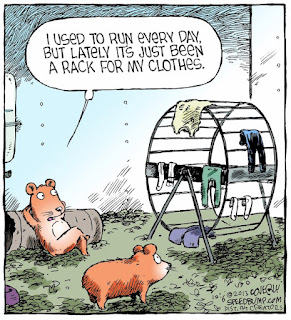 Yes the exercise continues...some days, lol.  We'll see how things are when I count up my month end jazz.  I feel like it's been lighter, due to weather and travel and yard work; but we'll see. 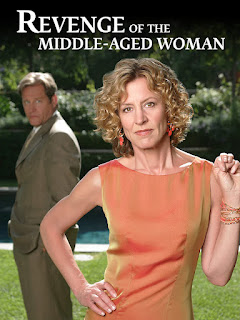 I watch different TV shows when hubby's not around.  I think he would call this a "chick flick".  This movie is from 2004, though I don't ever remember seeing it advertised nor hearing anyone talking about it.  It's on Amazon Prime, and might be on Netflix as well.  I enjoyed it while sipping wine.  I've always liked Christine Lahti, though she's not in that many movies/shows.  Bryan Brown (who you might remember from Cocktail with Tom Cruise) is always a favorite and adds to anything he's in.  Abby Brammell (who I only knew from years later when she was in The Unit), is also in the movie.  The title is a bit misleading.....until it isn't. 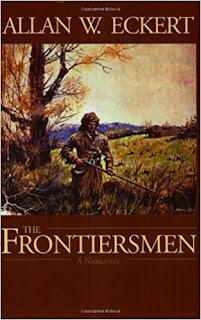 Shocked?  A book that's not about World War II, but it is historical.  Very historical!! The Frontiersmen by Allan W. Eckert is absolutely fascinating, all 31 hours of the audio book.  Living in Ohio, who's family hailed from Chillicothe, the stronghold of once impressive Shawnee Village it took on special meaning for me.  There are many places in Ohio and Kentucky where this book travels that I've been to.  As a child Daniel Boone and Davy Crocket were my hero's.  I had a coon skin cap, though as an adult learned that my hero Davy Crocket did not wear one in real life, only in the movies and on tv.  Davy is in the book as well as Simon Kenton.  Simon is the main character and while I knew he was the famous Indian Fighter and from Ohio, which I learned in 7th grade Ohio History ( a favorite class and teacher); I learned much more from this book.  I've been to the outdoor theater Tecumseh and Blue Jacket.  They both loom large in this book as well.  Put this on your list folks.

I've not worked on either of the asymmetrical scarves, as I'm currently focused on The Snail Hallow Shawl, and watching and listening to The Hearings.  January 6th and all that lead up to that.. is .such a dark period in the history of our country and it's democracy.