Stuff and Such on Sunday 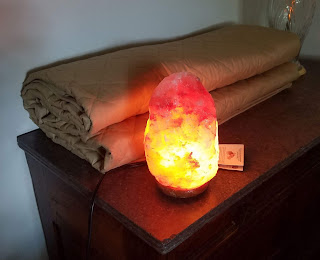 Pink Himalyanan Salt Light.  Have you heard of them, seen then, use them?  They're often used in Yoda Studios which is how my friend learn about them.  They provide a very nice soft light and are quite relaxing.  Thus the yoga connection.  However, they are reported to have other benefits like increased energy, improved mood, better sleep.  Some say they purify the air.  I bought mine through Amazon for under $20.00 and it had the low wattage bulb with it.  It also has a dimmer with 5 selections which is nice.  We tend to use it on the lowest or 2nd to lowest setting.  The light is actually a chunk of pink Himalayan Salt from the area of the Khewna Salt Mines in Pakistan.  They're decorative.  I bought it to see if helped hubby sleep...I think maybe it does, which in turn helps me to sleep or perhaps it helps us both directly? 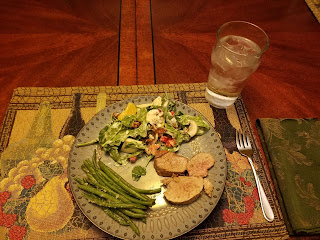 A recent meal that was particularly good.  Pork Tenderloin, fresh green beans and a nice salad.  I like to prepare the pork when I bring it home from the grocery.  But, when buying from Cosco you get a rather large package and each package has 4 tenderloins which I season, cut in half, wrap in wax paper, then foil and then freeze in a zip lock bag.   By seasoning ahead (and doing all 8 pieces at a time), you have less mess and safe time.......but additionally the meat has a chance to absorb the flavors of the seasoning more than just seasoning them when you're ready to cook them.  A half piece of tenderloin is perfect for a dinner for 2 people.  3 slices for me, and usually 4 for hubby. 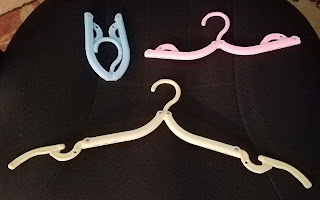 Travel Hangers.  They are laid out in the 1-2-3 of how to use.  They come folded (like the blue one).  Step one fold down the 2 sides (gives you the size of the pink one), fold out the ends of the 2 sides gives you the size of the yellow one.  They are light weight plastic.  I spotted them advertised the other day and immediately wanted them.  Oddly enough my friend (that told me about the Himalayan Light), sent me a text saying she spotted them too.  We often compare notes on good things travel related.  I ordered them pronto, believe she did also.  I got a package of 10 from Amazon for $9.55.  I think they will be really handy when traveling in Europe where often hangers can't be removed from the closet.  If you ever need to de-wrinkle clothes in the shower, or do a little hand laundry...you need to be able to move the hangers. 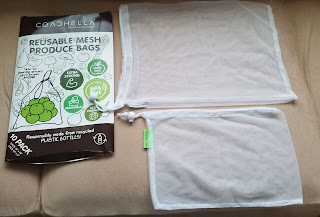 Amazon, my favorite place to shop probably really likes me lately.  I've been shopping from the comfort of my computer.  So much talk of late about the condition of our environment and what we can do to help.  Not using plastic bags at grocery stores for fruits and vegetables is a big one.  The package says these are reusable mesh produce bags that are safe, washable, and eco-friendly; as well as BPA free.  So, thought I would give them a try.  There are 2 sizes, 5 of each size.  I paid less than $10.00 from memory, but can't find my original order to be exact.  I didn't know when I ordered them but, they are made from re-cycled plastic bottles which is an added bonus in my opinion. 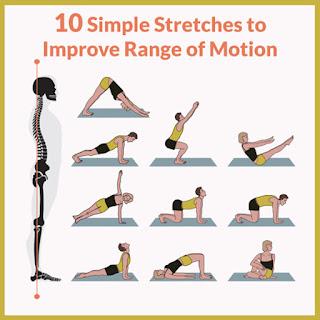 I still have the Vertigo, so saved this on my computer in hopes of being able to do these stretches later on.  If you try them, let me know what you think.  They look like good beginner yoga moves.  I am doing more walking again (but sometimes have to stop to slow the dizzies.  But leaning over to do these right now.......nope, not happening. 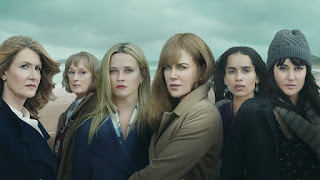 "Dirty Little Lies".  A HBO series with views of the beach, and The Bridge was perfect for my daughter and I to watch while we were in San Francisco (though the actual bridge photographed was in Big Sur...it felt like we were where it all was filmed.  Based on a best seller by Liane Morarty this 2 season series is packed with stars: Laura Dern, Meryl Streep, Reese Witherspoon, Nicole Kidman, Joe Kravitz, and Shailene Woodley.............at least those are the women who's names are listed as they appear in the above photo.  It appears though there won't be a 3rd season from what I can find.  Darn it, enjoyed it.  Though doubt hubby would have, it was a good chic flick.  AND we don't have HBO...so there you go.  Have you watched?

No pictures of projects or yarn, cause I have nothing new to show you all, but hope you're keeping busy.
Posted by Sandy at 5:31 PM