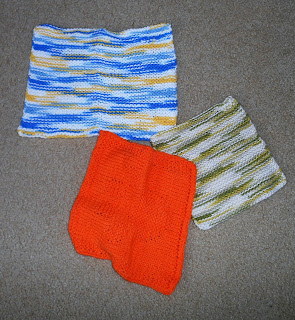 Good grief, I had no idea it had been so long since I'd blogged here.  I knew it was way way over due, just hadn't realized it had been 8 months.  NEVER in all my blogging years have I gone so long without blogging.  So, this will be a bit of a catch up.  Life's been busy.  I've kept up with blogging on Bridge and Beyond (My charity blog dedicated to taking care of the homeless), have traveled ALOT, have made walking daily and or going to the gym a big part of my daily routine which has greatly helped my arthritis and reduced my cholesterol level.

The 3 cotton washcloths (knitted), were found when I decided I needed to clean up and organize my project bags.  Totally had forgotten I made them.  They were donated to Bridge and Beyond.  The purple scarf/mobius was also found in a project bag.  I'd started it for darling daughter who loves purple.  The yarn is called Marbles and it's really soft, and very nice to work with.  She decided she'd prefer an infinity/mobius scarf over a scarf scarf .  So... 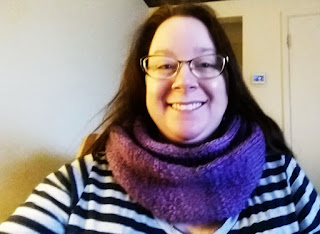 I finished it and she's a happy camper.  Worked on it after she came home for Christmas, and had it ready for her when she came home to celebrate my Dad's 90th.    Really pays to go through project bags more often.  I also found some extra knitting needles that I thought I'd lost.  LOL 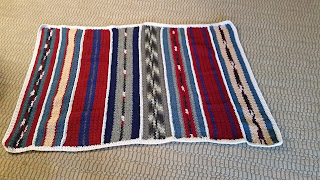 Finished this afghan while in Hilton Head also.  One needs lots of yarn and projects for an extended 3 wks vacation.  We go in Jan and Feb so it's not beach weather. And it keeps me busy while hubby's enjoying his golf.  This afghan was made from donated strips I assembled for Bridge and Beyond.  It's called Navajo. 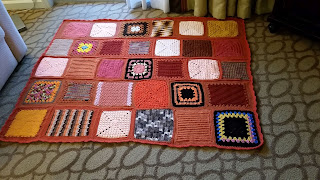 This is Rusty Nail, another ghan I assembled while in Hilton Head.  This one from donated squares and rectangles (some knitted some crocheted).  It was a bit tedious, in that the sizes varied a lot so some rows have 6 squares, some 7.  Both displayed as they were being blocked after being laundered. You might notice the 2 different carpets...we stayed in 2 different locations. 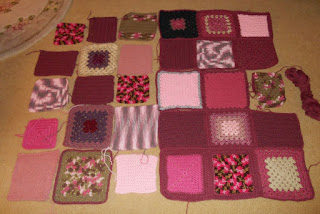 This ghan Dusty Rose also traveled to Hilton Head.  I got started on assembling it, but didn't get it completed while there.  It's also a mix of knitted and crocheted squares from donations of varying sizes through Bridge and Beyond.  Had to spread it out here at home to see what to edge and attach next.  This ghan is still in the works, though progress is much farther along then when this picture taken. 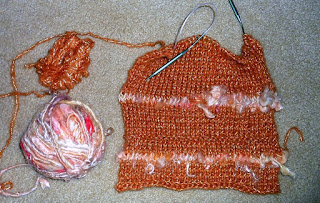 AND found this work in progress also in a project bag....not sure I'm overly happy with the way it looks, perhaps thats why it was buried?  Will give this some thought to decide whether or not to continue or frog this. 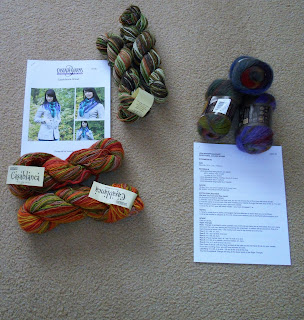 AND....yes I need my head examined, as you see I've purchased more awesome yarn and patterns for more projects.  Really....the kit on the left was 65% off, so how could I not order it?  The greens are called woodland I think and the yarn with the orange mix is called Fall.  Why order just 1 kit when you can order 2 at 65% off?  Sorry the yarn on the right and pattern has no picture, it's a triangle type scarf that's called out to me several times, and it was still as good deal at 35% off.

Wish I could tell you that was it for my work in progress projects, but it's not.  I know I have a scarf I started for myself a keyhole scarf that I took off the needles (don't know where I left off), and I know there's at least one ghan I started years ago tucked away.........really tucked away, I haven't even found it, but I know it's here.....somewhere.  I only worked on project bags in my office, not the ones in the basement.  That will have to be another time.

Looking forward to visiting my blog log to see what you all have been up to.  Sorry for the length of this post......but after 8 months...what can I say.